Animation film experts, international festival representatives and filmmakers will bring their knowledge and contribute their works to the International Animation Film Festival 'Nikozi' in one of Georgia's oldest remaining villages starting this Friday.

Contemporary and classic Georgian animation will join works from around the world in the program announced by organisers, while a strong educational focus will see cinema students hear from professionals.

These will include a talk on Workflow Experience for Storyboarding by Hungarian animator Gyula Szabo, an event for students of the Saint Alexandre Okropiridze Art School by Italian filmmaker Roberto Paganelli and workshop on contemporary choreography by Be van Vark and Mevlana van Vark from Germany. 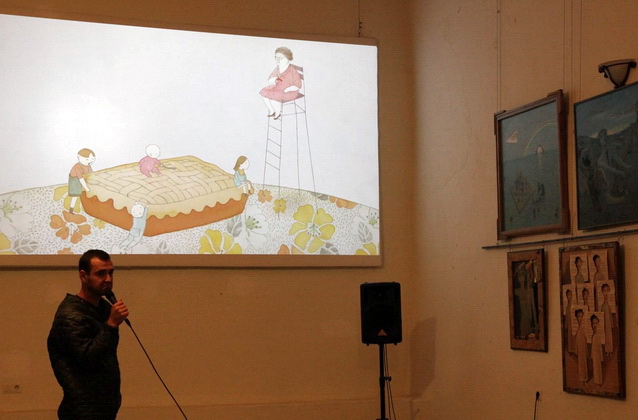 The festival will involve a focus on educational activities through workshops and talks for aspiring film students. Photo: International Animation Film Festival 'Nikozi'.

French producer Olivier Catherin will make another appearance for aspiring animation students at the festival, while Laurent de Schepper Trio will present live music from animation films for the audience.

Representations from festivals and agencies will include the Annecy International Animated Film Festival, Filmfest Dresden as well as the National Film Board of Canada.

The annual event will be held in village of Nikozi, 90km northwest of capital Tbilisi and near the Administrative Boundary Line separating the occupied region of Tskhinvali (South Ossetia) from the rest of the country.

The Nikozi festival will mark its seventh edition this year and run through September 7.

The idea for establishing the animation festival came from the Diocese Metropolitan of Tskhinvali-Nikozi, Isaiah Chanturia, who set up a small animation studio at a local monastery, later damaged in the Russia-Georgia war of 2008.

However the studio was brought back to life with the help of agencies from Georgia's partner countries, with students of the school now working on animation along with other forms of art.

The Nikozi festival itself has been held in the village since 2011. Earlier this year it received the Europe for Festivals — Festivals for Europe (EFFE) Label from the European Festivals Association, granting it further exposure to international audiences and companies.