Award-winning Georgian violinist Lisa Batiashvili and celebrated French cellist Gautier Capucon will perform in Tbilisi in a concert for the benefit of children with disabilities later this week.

The two artists will join the Georgian Philharmonic Orchestra led by conductor Nikoloz Rachveli for the event at State Opera House of Georgia on June 17.

The event will see the two acclaimed performers and the orchestra perform works by Sergei Prokofiev, Antonin Dvorak and Johannes Brahms.

The event will serve a specific cause, being dedicated to a UNICEF campaign for combating social stigma against children with disabilities.

Looking forward to my next visit to my home country Georgia — this time with a dear friend and amazing musician Gautier Capucon, who in spite of his crazy schedule agreed to come all the way to Tbilisi to give a unique listening experience to the audience and musicians on stage”, Batiashvili told her social media followers this week.

Batiashvili will appear in Tbilisi in the wake of her June 4 performance at the Barbican Centre with the London Symphony Orchestra.

Meanwhile, Capucon is in the middle of a season featuring his appearances with orchestras including London Symphony Orchestra, Berlin Philharmonic Orchestra and Staatskapelle Dresden.

The acclaimed cellist is a graduate of the Paris Higher Conservatoire and University of Music and Performing Arts in Vienna.

Capucon has been honoured for his performances with prizes including four Echo Classics Awards from 2004-2012 and first prize of the 1999 Andre Navarra International Cello Competition in Toulouse, France. 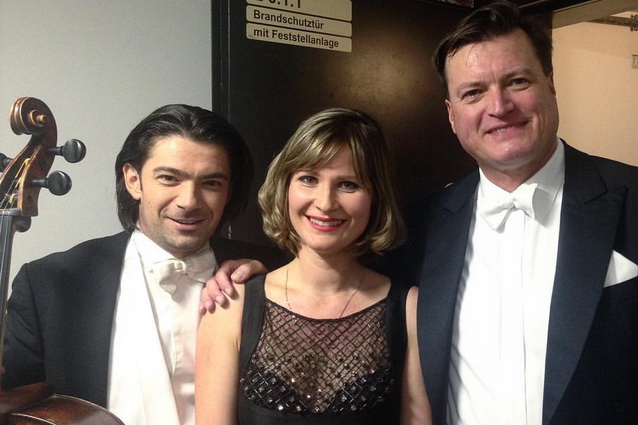 Batiashvili and Capucon (L) will join the Georgian Philharmonic Orchestra for the concert. Photo: Gautier Capucon/Facebook.

Georgian-born Batiashvili has been based in Germany since the early 1990s. A graduate of the Hamburg High School of Music, she is currently Artist in Residence for Royal Concertgebouw Orchestra Amsterdam in the Netherlands.

Named 2015 Musical America Instrumentalist of the Year, she was praised for "meticulous musicality and emotional power" by the online platform.

In January, a new album featuring the Georgian violinist with the Staatskapelle Berlin orchestra led by famous conductor and pianist Daniel Barenboim was named the finest recording of January 2017 by leading classical music review magazine Gramophone.
Back
Tweet