Night at the Museum celebrations to host visitors at Georgian venues

Dozens of museum venues in Georgia's capital Tbilisi and regions of the country will open their doors for visitors looking to spend the night in performances and activities within this year's Night at the Museum celebration next weekend.

Launched last year, the event marks Georgia's participation in the European Night of Museums initiative, patronised by the Council of Europe and UNESCO.

The expanded program for the 2017 edition will see museums and gallery venues across the country host guided tours, costume performances, games for children and music concerts held for visiting museum-goers from dusk to early morning hours. 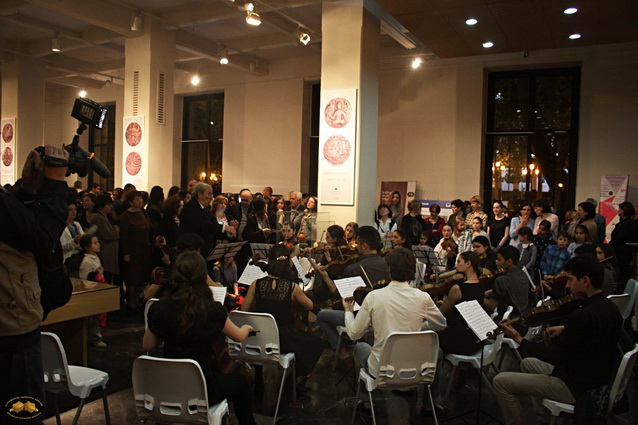 Events of the date will include music concerts entertaining visitors in the late hours. Photo: Georgian National Museum.

In capital Tbilisi, the festivities will be joined by six venues of the Georgian National Museum network, as well as museums under Tbilisi Municipality and private ownership.

In regional cities and towns the Night at the Museum events will be hosted at venues including the Batumi Archaeological Museum, which will host a display illustrating the history of the ancient Greek Argonauts' trip to Georgia's Black Sea coast in 1300 BC.

In the town of Sachkhere in western Georgia's Imereti region, the Akaki Tsereteli State Museum will host a screening of the 1912 documentary The Travels of Akaki Tsereteli. Recognised as the first-ever Georgian feature film, the work saw director Vasil Amashukeli follow celebrated national poet and public figure Akaki Tsereteli in his trip to Georgia's west.

Other museums hosting events for the date will include Vazha-Pshavela House Museum in famed late 19th-early 20th Century Georgian poet Vazha-Pshavela's native village of Chargali. The venue will invite visitors to learn wool matting and sewing as done in the mountainous north-eastern village.

In support of this year's Night at the Museum celebrations, students of Tbilisi State Academy of Arts will create murals in districts of Tbilisi. The program of night-time activities itself will be organised by the Ministry of Culture and Monument Protection of Georgia.

The full list of activities planned for museums throughout Georgia can be viewed here.