A photo exhibition titled A Girl is Born is opening tomorrow in Georgia's capital that speaks out against gender-biased sex selection and support to raise public awareness of the importance of treating boys and girls equally.

Dina Oganova, a Georgian documentary photographer and recipient of various prestigious awards, is behind the exhibition that will open at 5pm tomorrow at the NATO and EU Information Centre Exhibition Hall, located at Freedom Square in Tbilisi.

The exhibition, which will run until November 27, was organised by the United Nations Population Fund (UNFPA) Georgia Country Office within the framework of the United  Nations (UN)  Joint Programme for Gender Equality, that's funded by the Swedish government.

The exhibition is dedicated to the 16 Days of Activism against Gender-Based Violence, as Georgia is among the countries where the problem still exists. 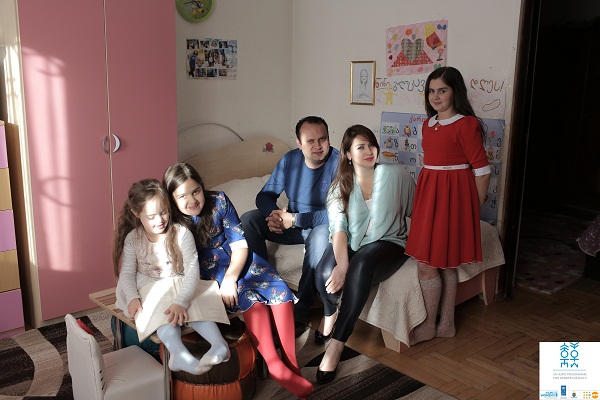 The author of the project recorded short quotes by family members to explain why equality is important for harmonious family relations. Photo by Dina Oganova.

A survey conducted by UNFPA in 2014 showed if a family in Georgia chose to have one child, 46 percent of citizens preferred the child to be a boy.

The photo exhibition features families from Tbilisi and eastern Kakheti region that only have daughters.

The aim of the project is to raise public awareness of the importance of treating boys and girls equally, providing them with equal opportunities for development and empowerment for the benefit of the family, society and the country at large,” said UNFPA.

The woman behind the project has also recorded short quotes by family members of daughter-only families to explain why an equal approach is important for harmonious family relations and public development.

The result of this practice in the long run is escalation of violence, economic regress and falling birth rates,” the organisation stated.

To help change society's mindset that boys were preferred over girls, UNFPA stressed it extremely important to firstly acknowledge the problem and start public discussions to change social standards and behaviours that lead to gender-biased sex selection.