Georgia has worked hard to improve democracy and the rule of law and is proud to be ranked the fifth freest economy in the world, Prime Minister Giorgi Kvirikashvili told guests attending the United Nations General Assembly (UNGA) in New York, United States (US).

Georgia’s top official spoke today in front of hundreds of guests at a high level session within the UNGA. He touched on a lot of topics, including the country’s economic achievements and goals.

He noted Georgia was "proud” to have ranked in the top five freest economies in the world, and this helped "ensure openness and integration into the global market and equal opportunities for all people investing in Georgia”.

He also stressed his Government had done its utmost to make all public services "even more accessible for business” to improve the business environment in Georgia. One way to do this was through the new Business House project in Tbilisi, Georgia’s capital. The ambitious project involved creating a special place, together with an online platform, to serve as a one-stop-shop for businesses and as a front office for all government bodies, the PM said.

He noted central to good governance was "fair and efficient tax collection” and efforts were already underway to liberalising taxes further, even though Georgia was already one of the lowest tax burden countries in the world.

Although this was a costly reform, it ensured the long-term sustainability of business and jobs, said Georgia’s PM. 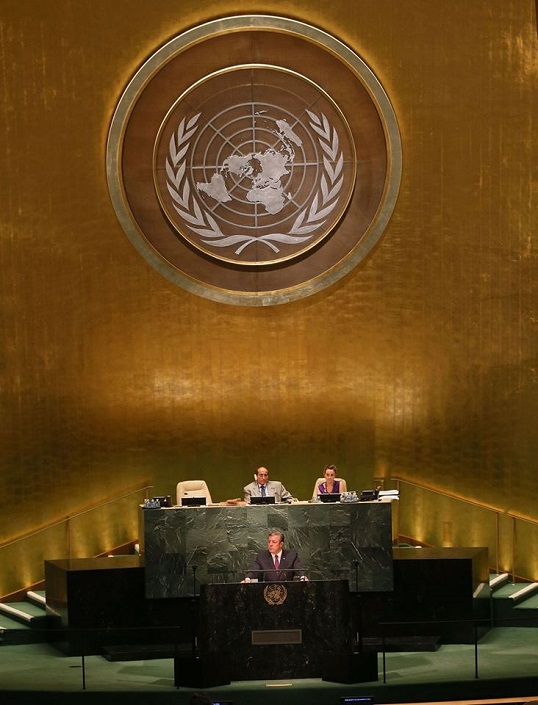 "We are honored and excited to be working with China and other nations to restore the New Silk Road and provide a critical piece of a new trade and investment corridor that will benefit the entire world,” said Prime Minister. Photo by PM's press office.

Kvirikashvili briefed the UNGA session about Georgia’s large scaled infrastructural goals and said the Government will invest more than $5 billion USD in connectivity and infrastructure in Georgia the next four years.

Thanks to Georgia’s strategic location, our ports, roads and transport networks will be an important part of our ambitious and transformative Silk Road Development Plan connecting Europe and Asia,” he added.

Kvirikashvili stressed the local and international importance of the New Silk Road project and he mentioned the success of the Tbilisi Silk Road Forum, which was participated by 35 countries.

"We are honored and excited to be working with China and other nations to restore the New Silk Road and provide a critical piece of a new trade and investment corridor that will benefit the entire world.”