Georgia’s former Prime Minister and founder of the ruling Georgian Dream-Democratic Georgia (GDDG) party Bidzina Ivanishvili has today started his televised meetings with representatives of regional media to answer journalists’ questions during the pre-election campaign ahead of the Parliamentary Elections on October 8.

The first program within a series of pre-election talk shows 'Meetings with regional media' was broadcast from Adjara region. The television series was created by GDS TV, owned by Ivanishvili’s son Bera and will include ten interviews conducted with local journalists in all regions of the country.

Former head of Georgian Government underlined in the introduction that he had "no personal interest”, "no ambitions to hold any kind of post” and "no business in Georgia” or the upcoming elections.

The main reason for [my participation in this project] is to serve my country. As a citizen I have the responsibility to care about my homeland as much as I can. We should have a country with equal opportunities for our children, for all citizens. This is my personal interest,” stressed the ex-official as he explained his motivation to analyze the pre-election period via this TV project.

Election results for the ruling party

After this election Ivanishvili expected to see around 100 Members of Parliament (MPs) from the 150-seat legislative body represent the GDDG party in Georgia’s next, ninth Parliament.

I cannot imagine less than 90 MPs from the GDDG party. To be more precise, I think it’s more likely to have 115 ruling party members than 90. Georgian Dream will have around 100 lawmakers and there is strong suggestions in society for this outcome.”

The main challenges of GD

Ivanishvili said he was proud of the changes and new "ruling standards” installed by the Georgian Dream party.

The ex-PM said the main challenges the country faced when Georgian Dream came to power after the Parliamentary Elections in October 2012 were: 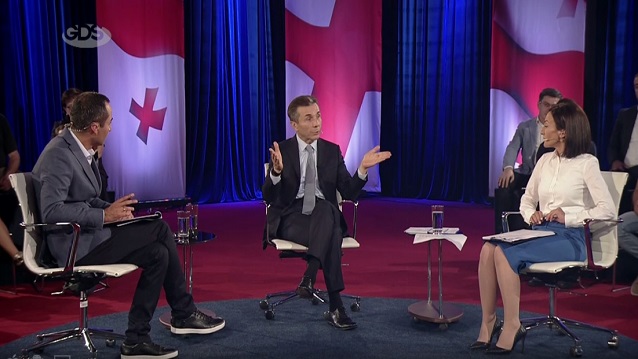 Screenshot from the TV project 'Meetings with the regional media'.

Who are main competitors of GDDG in the upcoming elections?

"There are no serious competitors for the Georgian Dream party,” emphasized former Prime Minister Ivanishvili as he summarised the pre-election environment.

"Surprisingly two wings of United National Movement (UNM) can be considered as the main competitors. One wing is the new bloc of Vashadze and Saakashvili’s favorite young leaders and Paata Burchuladze who joined them. The other wing is UNM itself.”

What does Ivanishvili think about accusations of ‘informal governance’?

"No I am not ruling the country; Kvirikashvili is doing it and does this very successfully using the standards and methods we implemented four years ago. This is the main advantage of Georgian Dream, that the Government retains its high standards of governance,” said Ivanishvili when answering a question from the opposition about ‘informal governance’.

"I suggest maybe they call ‘informal governance’ the set of standards I established and the team [GD] uses them up to now. Such governance standards as the rule of law, which is a priority first of all for the head and all members of the Government,” said the ex-leader when comparing this approach with UNM’s ruling period when "the law had no impact on the political elite”.

As a citizen I am one of the controllers of this Government, as a citizen but not more. To tell you the truth I used to give more advice to Saakashvili than I do to Kvirikashvili,” he concluded.

Ivanishvili concluded he would be first to criticize the Government if they failed to retain the high standards GD established four years ago.