Mistakes may have been made during dive training which led to the death of two soldiers after they failed to surface during a deep sea dive last week, says a top Georgian official.

Corporal Iago Sharadze and First Class Private Giorgi Nanetashvili were taking part in dive training on August 16 but failed to surface after the planned dive, which took place off the coast of Gonio in the Black Sea.

The men’s bodies have not yet been found but they are presumed dead.

Today Georgia’s Minister of Defence Levan Izoria said the investigation into the incident has revealed some "obvious signs of a crime” and mistakes may have been made during the dive training exercise, which resulted in the death of Corporal Sharadze and First Class Private Nanetashvili.

At this stage we can say, based on preliminary information from the investigation, that there are obvious signs of a crime. I exclude that it was the fault of one individual, it’s a wider circle,” said Izoria.

Corporal Sharadze and First Class Private Nanetashvili were undergoing mandatory dive training within the scheduled maritime special course on August 16. They failed to surface after the planned dive.

The following day, at the request of the Georgian Government, the United States (US) forces assigned to Special Operations Command Europe (SOCEUR) got involved in the search for the soldiers.

Also on August 17 a vessel from Turkey’s Coast Guard Service, with nine expert crew on board, entered Georgian marine space to participate in the search and recovery operations.

In the early morning of August 20 a mine hunting ship from the Turkish Navy TCG AKCAKOCA entered the territorial waters of Georgia to show major support in the search for the two missing men. 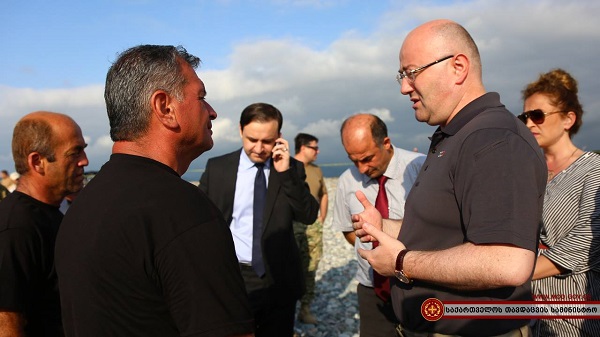 Minister Izoria speaks with the parents of the missing soldiers. Photo by Georgia's Ministry of Defence.

Izoria boarded the Turkish Navy ship to observe the search from the vessel. Also on board the ship was Consulate General of Turkey to Georgia Yasin Temizkan, chairman of the Adjara Autonomous Government Zurab Pataraze and director of the Interior Ministry’s Coast Guard Department Temur Kvantaliani.

When the Navy ship entered Georgian waters Izoria initially said it could remain for three days, but if necessary the mine hunting ship would return.

The vessel weights 650 tonnes, carries 41 personnel and is equipped with expert sonar system that can carry out search operations in depths of 200m and a 350m radius.

The vessel may get involved in the searching operating again in a week,” said Izoria today.

The parents of the two missing soldiers were also on board the Turkish Navy ship last week, observing the searching operation.