Georgia’s former Prime Minister, multi-billionaire Bidzina Ivanishvili has purchased a rare painting by iconic Georgian artist Niko Pirosmani for about $900,000 USD and is donating it to a Georgian National Museum venue in capital Tbilisi.

This afternoon the former high official announced he would donate the piece named Roe Deer Drinking from a Stream, to the Georgian National Museum.

Ivanishvili purchased the rare painting at a Sotheby's Auction event in London on June 7.

When meeting with local media today, Ivanishvili said his plan to donate the piece to a local museum museum was part of a larger effort to promote Pirosmani worldwide. 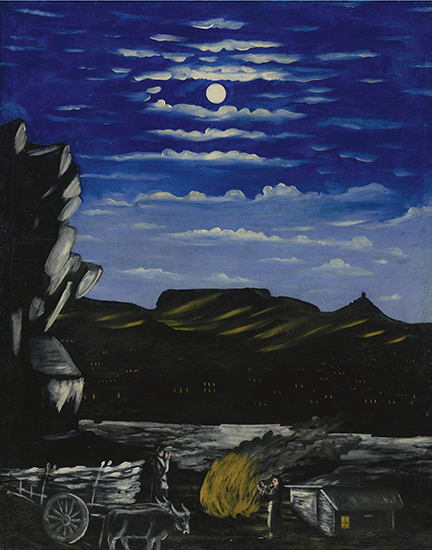 In 2015 Ivanishvili bought another of Pirosmani's works, named 'Arsenal Hill at Night', before donating it to Tbilisi's Shalva Amiranashvili Museum of Fine Arts. Photo from Sotheby's.

Purchasing a Pirosmani work and handing it over to a museum might diminish its popularity, because an artwork should be on the market and visible to the world. But maybe we should have a discussion on exchanging 30 percent of Pirosmani's paintings with other museums in return for works by other artists,” said Ivanishvili today.

"This is why I will hand over this artwork to the museum, to initiate a discussion on how to make Pirosmani more popular worldwide,” he said.

Roe Deer Drinking from a Stream was one of six works by classical and contemporary Georgian painters sold at the Sotheby's auction on June 7.

The auction's Russian Pictures and Contemporary East categories had eight paintings by Georgian artists up for sale.

Last year Ivanishvili bought another of Pirosmani's paintings at Christie's Auction in London before donating it to Tbilisi's Shalva Amiranashvili Museum of Fine Arts.

Arsenal Hill at Night, created by Pirosmani circa 1907, was purchased by Ivanishvili in 2015 for almost $1.5 million USD and later exhibited for public at the Tbilisi museum.