Kvirikashvili was voted unanimously by delegates at the party’s fourth congress currently being held at the Sports Palace in Tbilisi.

"Chairmanship of the ruling party is a great responsibility for me, and I can tell you that from a political point of view it is a great challenge for me,” said Kvirikashvili when he addressed the congress.

The new chairman said he was ready to serve his country and do everything for the country's progress and development.

"From today as the chairman of the Georgian Dream, I take personal responsibility for the activities of our party and I’ll do everything to make it a team of successful people who selflessly serve the country,” the PM said.

Read the full transcript of the speech.

He promised the party would soon be joined by new people who were professionals and would "bring a new positive dynamic to the party and to Georgian politics".

The PM tasked his party members to immediately begin face-to-face meetings with the general population so they could better understand the problems facing society.

"We should show everyone that we firmly stand for democracy and, first of all, we should do this by respecting democratic values inside the party,” Kvirikashvili said.

He added the Georgian Dream’s foreign policy would remain committed to the Western aspirations.

"The foreign political vector of our party fully meets the Georgian people’s rhetoric and historic will to be part of Europe,” the new chairman said.

Kvirikashvili looked over the past four years and talked about what the party had achieved. 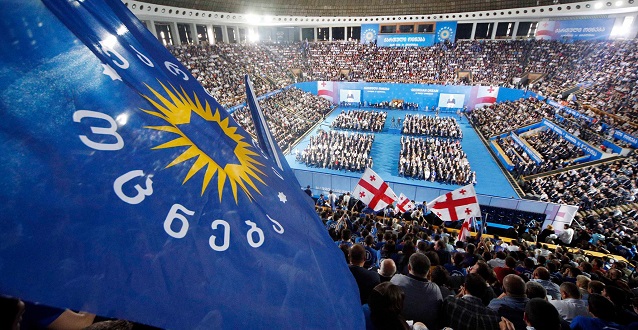 "Have the past three years been faultless? I’ll tell you directly that the answer is no, and this is natural for a young party,” Kvirikashvili said.

"But we didn’t find it difficult to admit these mistakes and face this reality.”

"However, I should also say that we haven’t really made a mistake that harmed the country.”

He also said that from this point of view, on the fourth anniversary of the party’s foundation, it was obvious that the Georgian Dream "had solved many problems and overcome many difficulties”.

"What’s most important, in that difficult situation we avoided the threat of revenge, which the country faced,” he said.

"Revenge has never been our goal. We believe that revenge is the past, it’s regress and its stunts development.”

He added the party had gone through many things and now it was ready for new challenges and provide a better future for the nation.

"I believe that we will win and this belief is strengthened by our unity, renewed team, renewed energy and concrete plans that our people trust in,” Kvirikashvili said.

The post of the chairman of the Georgian Dream fell vacant after former Prime Minister Irakli Gharibashvili left the party.

As of today, the party has had only two chairman – Garibashvili and now Kvirikashvili. As for former Prime Minister Bidzina Ivanishvili who created the party, he served as Honorary Chairman of the Georgian Dream.