The Georgian national flag is being flown at half-mast at the country’s Government buildings today in remembrance of the hundreds of thousands of young soldiers who died in the battle of the Soviet Occupation of Georgia 94 years ago.

Flags have been lowered at Tbilisi and Kutaisi Parliament buildings and the residence of the President today to mark the event where Georgia lost its independence when Bolshevik’s Red Army took over Tbilisi on February 25, 1921.

To mark the occasion, Georgian officials will lay a wreath at the memorial dedicated to those who lost their lives while fighting for Georgia’s independence. 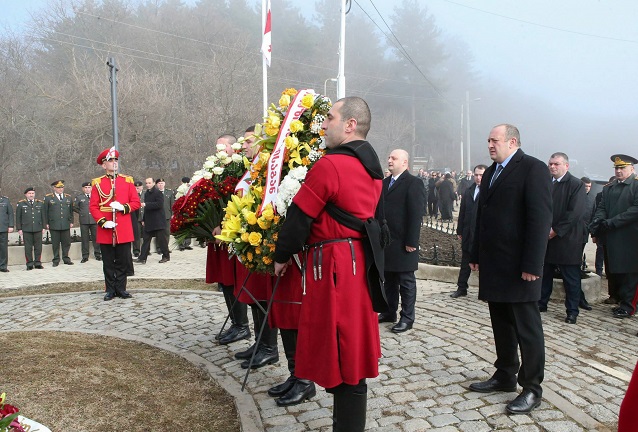 Georgian President and Minister of Defence pay honour to the Memorial of Cadets in Kodjori. Photo by the President's press office.

Georgia’s Prime Minister Irakli Garibashvili said February 25 was one of the most "tragic days” in the history of the country.

The 70-year rule of the Soviet occupation regime had "devastating effects” on the country and the best part of our nation made a huge sacrifice to fight for Georgia’s freedom, he said.

Despite the communist ideology and the regime the idea of freedom and striving for independence has never vanished in people; their struggle for freedom has never been suspended. Today Georgia is an independent country and it is the result of the devotion of many generations. Our responsibility is to protect this great legacy, maintain and strengthen our country,” Garibashvili said.

The Day of Soviet Occupation was first officially marked in Georgia by the former government in 2010. Parliament unanimously passed a resolution instructing the government to organise various memorial events each year on February 25 to commemorate the hundreds of thousands of victims of political repressions of the Communist occupational regime.

On this day 94 years ago Georgia lost its independence and became part of the Soviet Union. On February 25, Russian invaders took over Tbilisi and announced it had established power in Georgia.

Click here to watch a short documentary about the Soviet Russian Invasion in Democratic Republic of Georgia.