Driving on Georgian roads is about to get safer – the Ministry of Internal Affairs is launching a new traffic security program to increase safety and raise awareness of the rights and responsibilities of drivers, passengers and pedestrians.

The Ministry introduced a new program today that outlined amendments to current legislation to reduce the number of road accidents and address the main reasons for such incidents, including speeding, drink driving and incorrect maneuvering.

The program also offered improved control on public buses, encouraged gradual upgrading of older cars nationwide, introducing off-site patrolling via surveillance cameras, restricting registration of new imported right-hand drive vehicles, refining of legislation for pedestrian safety, introducing a new demerit points system for all drivers and practical driving tests that include road driving instead of the only in carparks, which is currently the norm. 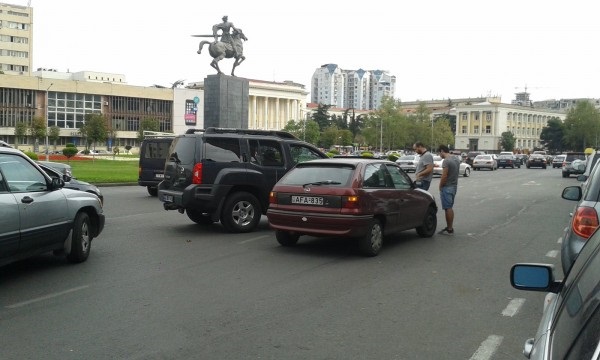 The demerit points system – in place in a high number of other countries – needed to be explained by the Ministry as it was such a new concept in Georgia.

Essentially drivers were each year given 100 points, which was monitored on their license. Points were deducted each time a driver committed a traffic infringement. If a driver lost all their points, their license was confiscated and the driver must sit another driving test to reinstate their license. Meanwhile at the beginning of each year all points would be reinstated.

The Ministry said plans were in place to introduce this initiative in Georgia in March 2016.

Deputy Interior Minister Archil Talakvadze said a large-scale campaign would launch to raise awareness of the future changes to Georgia’s traffic rules. The campaign would be implemented well before the changes came into effect, allowing locals to be aware of the changes and punishments.

The amendments to the driving rules were drafted with assistance from foreign experts and non-governmental organisations.