The legacy of a prominent Georgian Catholic religious leader was celebrated this week in the Vatican in Rome.

A special scientific conference and holy mass involving members of diplomatic missions, scientists and Georgian diaspora in Italy gathered in the Vatican on Monday paid tribute to Father Petre Kharischirashvili.

The life and religious career of the Georgian historic religious figurehead was the focus of the event that began with a conference at the Vatican’s Eastern Institute, attended by Georgia’s Ambassador to the Vatican Tamar Grdzelidze.

The Georgian official addressed the audience alongside scientific and religious figures. In her speech she noted the current lack of awareness in Georgia about the religious work of Kharischirashvili, who founded the Holy Spirit Catholic Monastery of Istanbul. She also underlined the volume of available historical material on religious ties between Georgia and Rome.

The Georgian kings were eager to be in touch with Rome and with the Pope. There is a correspondence – rich I would say even – from medieval times in which the Georgian royalty are trying to establish good contacts with Rome,” Grdzelidze said to the gathered audience.

The legacy of the 19th Century Georgian Catholic figure was also the subject of speeches by Bishop Giuseppe Pasotto of the Apostolic Administration of the Caucasus as well as acclaimed Georgian and foreign scientists who are knowledgeable with Kharischirashvili’s contribution to the Catholic Church. 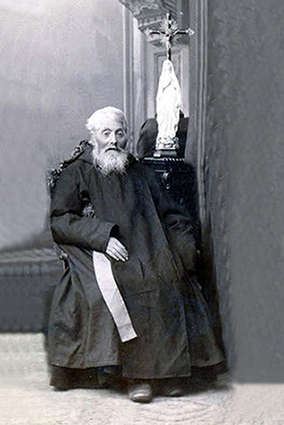 The audience also heard from Paola Zazadze-Arrigo, a member of the family who managed the Foundation of Georgian Catholics since 1936 and preserved the Istanbul monastery established by Kharischirashvili.

The conference was followed by a holy mass in memory of Kharischirashvili at the Santa Maria Magiore Church of Rome. The ceremony was led by Cardinal Leonardo Sandri of the Congregation for the Oriental Churches.

Sandri praised Kharischirashvili’s religious and publishing work and noted his "special love for the Georgian nation, its language and traditions”.

Father Petre Kharischirashvili (1805-1890) received his religious education at universities in Alexandrepolis (Greece) and Rome before founding the Holy Spirit Georgian Catholic Monastery in Turkey. During his life he also established Georgian printing houses in Venice, Italy and Istanbul, Turkey.

Fluent in French, Italian, German, Greek, Polish and Turkish languages, Kharischirashvili is recognised as one of the leading Georgian Catholic figures.