Mogherini, the EU High Representative for Foreign Affairs and Security Policy and Vice President of the European Commission, spoke at a press briefing after meeting with Georgian Prime Minister Irakli Garibashvili during her first-ever South Caucasian visit in Tbilisi today.

She assessed Georgia’s progress in implementing its Visa Liberalisation Action Plan (VLAP) and said: "The steps taken are actually positive. We can’t predict the results but we absolutely see the progress that has been reached through your hard work and high political will”.

The EU official also praised the dynamic development of Georgia-EU bilateral relations and Georgia’s implementation of its Association Agreement (AA).

Mogherini noted during her meeting with PM Garibashvili the pair discussed Georgia’s domestic political situation too. She stressed the importance of peace and stability as the country prepared for elections next year.

"I am confident that Georgia can hold democratic elections,” she said.

Mogherini added Georgians and Italians perfectly understood what emotions in politics meant but she stressed there were frames that needed to be respected, including media pluralism, rule of law and independence of the court. 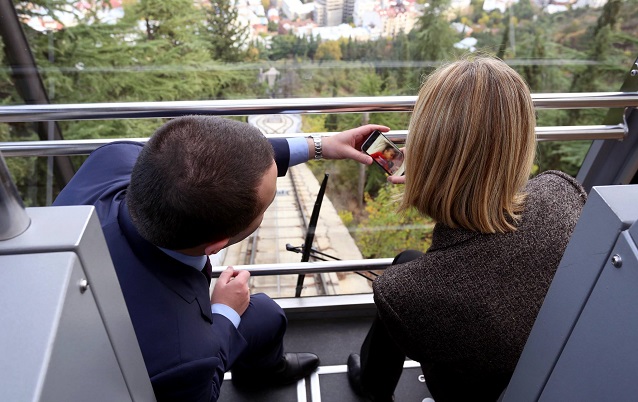 Garibashvili and Mogherini used an air gondola to get to the top of Mtatsminda, the mountain overlooking capital Tbilisi. Photo by the PM's Press Office.

This afternoon Garibashvili hosted Mogherini at a working dinner at the top of Mtatsminda hill, where the pair enjoyed the Tbilisi views while discussing high politics.

Later this evening the EU official will travel to the Administrative Boundary Line (ABL) between breakaway Tskhinvali region (South Ossetia) and the rest of Georgia before leaving the country tonight.