Azerbaijani President: “I am pleased we don’t have any difference of views”

The President of Azerbaijan Ilham Aliyev, who chose Georgia as the first country to visit after November 1 Parliamentary elections in his homeland, has held his first official meeting with Georgia’s President Giorgi Margvelashvili.

The strategic partnership between Georgia and Azerbaijan, political-economic relations and global issues were the major topics of the bilateral meeting, held last night in an enlarged format at the Presidential residence in Avlabari, Tbilisi.

Immediately after the meeting the sides signed an agreement to deepen relations in the fields of politics, security, trade-economic, transit, transport, culture, education and science.

In their statements for media both President confirmed the existence of the "irreversible friendship” between the two countries that had begun decades ago.

The fact that the Azerbaijani President came to Georgia shortly after winning the Parliamentary race is an obvious example of his respect to Georgia,” said Georgia’s President Margvelashvili.

Twenty years ago, in light of the positive relationship between out nations, strategic cooperation between our countries was established, giving a very important role to Azerbaijan, as well as to Georgia and the whole Caucasus region,” he said. 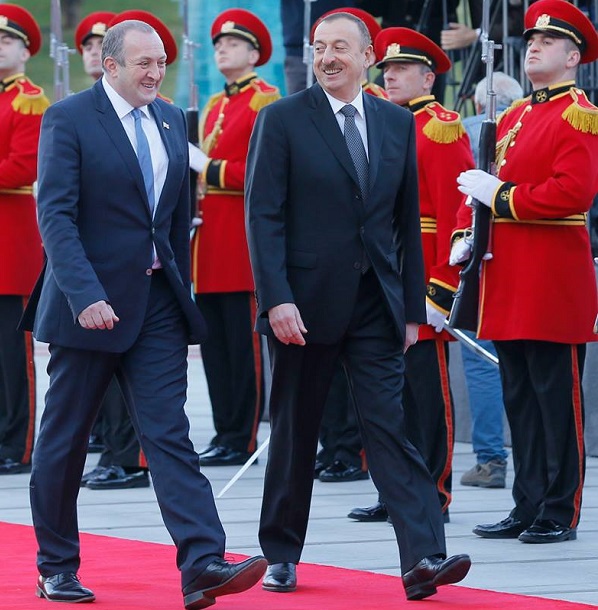 Today we discussed strategic cooperation, connecting us with Azerbaijan, far-reaching plans in relation with the Caspian Sea, as well as the Black Sea. We spoke about the deepening of transport and energy projects,” Margvelashvili added.

The Georgian President reiterated the two countries’ relations had "passed a serious exam” during and after the Russia-Georgia war of 2008, when Azerbaijani "definitely and clearly” revealed its support to Georgia’s sovereignty and territorial integrity.

Following this topic Margvelashvili stressed despite Russia’s aggressive actions on Georgian soil and permanent creeping occupation, Georgia "was devoted” to its transit role and could perform this role successfully to better connect Europe with Asia.

The projects we are speaking about are being implemented. Their perspectives are the deepening of energy and transport cooperation in Europe and more active participation of the Caspian states in this regard.

I am sure that these projects have great potential. However, they have potential not only for the Caspian Sea region but more globally, engaging China and in the regard of the development of the great corridor and we see each other as partners here too,” Margvelashvili said.

In response the Azerbaijani President confirmed Margvelahsvili’s words, saying Georgia and Azerbaijan’s relationships in economic and non-economic directions were mutual. 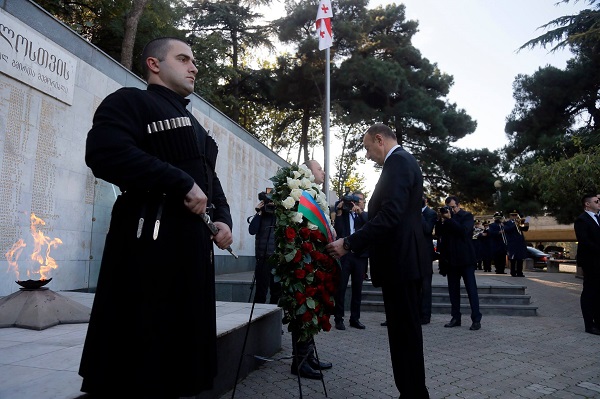 Azerbaijani President visited Heroes Square in Tbilisi and the memorial of the fallen heroes who died for Georgia’s territorial integrity. Photo by President's webpage.

I am pleased that we do not have any obstacles and a difference of opinions in any issues with Georgia.We are friends, we are brothers and our successful meeting and visit today is a successful step for our dynamic development in future,” Aliyev said.

The Azerbaijani official stressed that if the Baku-Supsa-Tbilisi-Ceyhan and Erzurum gas pipelines had not been built years ago, no one would be able to speak about the new South Stream.

We would not have the luxury to discuss it,” Aliyev said.

This concept has been successfully implemented step by step and I hope that Azerbaijani gas will be exported to Turkey in 2018 and in the European market in 2020. It is a great energy project and $45 million USD will be invested in it,” Aliyev added.

The Azeri leader added Azerbaijan had large gas reservoirs. This meant that after 100 years Azerbaijan would continue to be able to satisfy its own demands but its neighbours and then export gas to Europe.

Shortly after President Aliyev arrived in Tbilisi yesterday afternoon, he visited the Tbilisi monument honouring his late father Heydar Aliyev, where he paid his respects and laid a wreath. After this he visited Heroes Square and the memorial of the fallen heroes who died for Georgia’s territorial integrity.

Today the Azerbaijani official was scheduled to meet Georgia’s Prime Minister and other top officials.