The region’s prominent public figures and political leaders are in Tbilisi to attend the two-day event that will cover the most important security issues, including Information and Hybrid Warfare, Islamic State, relation of Georgia and Ukraine towards NATO as well as the Black Sea region and NATO Warsaw Summit 2016.

Garibashvili talked about his Government’s pragmatic policy towards Russia but also stressed the northern neighbour still continued its creeping occupation of Georgian land. He said:

"Let me be clear: relations with Russia cannot be settled at the expense of our sovereignty and territorial integrity.”

Garibashvili said he "firmly” believed that any nation had the right to choose its own partners and allies.

"Georgia has made clear that it sees its future destiny within the Atlantic Alliance community of free countries. In our understanding this choice is not directed against any country in our neighbourhood. On the contrary, our close ties with NATO should serve to enhancing regional security,” the PM said.

"Like any other country we have our internal challenges. But what makes me proud to be Prime Minister of this country is that we have a united nation ready to embrace change in order to achieve our Euro-Atlantic ambitions.”

"We are an outward looking, globally-connected country ready to deepen ties not only with our neighbours but also with every continent.”

Listen to the PM's full speech below.

Georgia – A candidate for NATO membership

NATO’s Special Representative for the Caucasus and Central Asia James Apathurai travelled to Tbilisi to participate in the security forum. He highlighted Georgia’s efforts in its North-Atlantic integration process and said:

"Georgia is a devoted and firm candidate of becoming a NATO member.”

"Georgia’s chances in NATO are clear and increasing. Its involvement is higher than other non-member countries.” 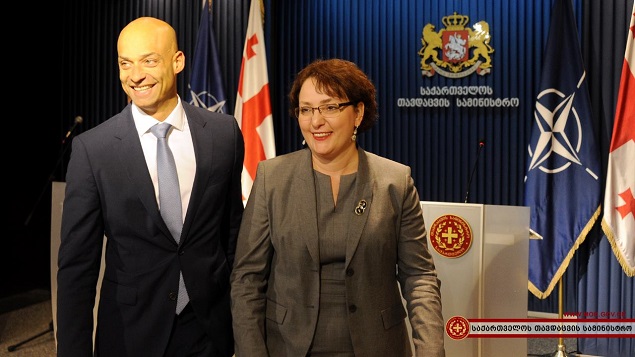 The NATO envoy also talked about the challenges facing the region.

"Russia does everything to weaken its neighbours’ sovereignty,” Appathurai said.

"Observing the Eastern Partnership countries, five of them have territorial integrity problems. We also see instability in the Baltic countries and threats have increased in the Black Sea region. We should remember Crimea, Syria, Iraq, etc.”

"If at the Warsaw Summit Russia was not told that there are no more spheres of influence, that Europe will not let a new Iron Curtain exist here, that Russia does not have a veto power on the countries which do not even have the right to vote – this will be our weakness and the victory of the Kremlin, which will push it to further aggression,” Khidasheli said.

"We hear statements about how Georgia does more for NATO than Alliance member states themselves. But we do not do this for someone to thank us. This is our choice – we want to be part of the global community,” Khidasheli said.

She also spoke about the difficult situation Georgians had to live in, stressing that kidnapping of the local population and frequent changes of so-called borders at the Russian-occupied regions of Georgia were part of the everyday life of Georgian citizens.

She believed Georgia’s situation could not be compared to the situation of other NATO aspirant countries. In this regard, Khidasheli said the expectations of the Georgian people would lower towards NATO if the Alliance did not make a stronger political decision and only continue voicing general messages of support towards Georgia.

The South Caucasus Security Forum 2015 was organised by the Centre for European and North Atlantic Affairs (CENAA), the Georgian Foundation for Strategic and International Studies (GFSIS) and the Georgian Ministry of Defence.