Georgian soldier wounded in Afghanistan on road to recovery

A Georgian soldier, who was seriously injured in an attack that left a Georgian soldier dead while patrolling in Afghanistan last week, is responding well to treatment and on the road to recovery.

Georgia’s Minister Defence visited Paata Rostobaia at the Landstuhl Regional Medical Centre in Germany today and afterward stated the injured serviceman was on the mend. 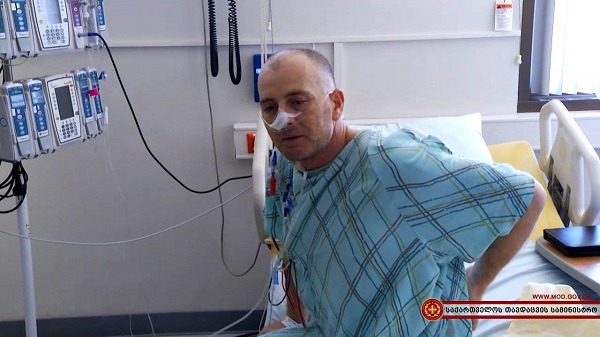 Georgian Armed Forces soldier Paata Rostobaia was wounded while on duty in Afghanistan on September 22. Photo by Ministry of Defence.

Last Tuesday Rostobaia and another soldier – who were part of the NATO-led Resolute Support mission – came under enemy fire while patrolling their area of duties at Bagram Air Base.

On September 22 NATO confirmed one Resolute Service member had died "as a result of an enemy attack”.

Serviceman Vasil Kuljanishvili was fatally injured while Rostobaia suffered severe injuries after being shot. Kuljanishvili was the 31st Georgian soldier to lose his life while involved in a peacekeeping mission since 2010.

We saw a very optimistic situation in the hospital. Rostobaia is feeling better. As the doctors said, he will recover very soon and will continue rehabilitation afterwards,” she said.

She added the Defence Ministry would transport Rostobaia’s family members to Germany so they could be with the soldier as he recovered.

After Sergeant Rostobaia returns home we will provide him with all the necessary assistance he needs for a full recovery,” Khidasheli added.

Chief of General Staff of the Georgian Armed Forces Major-General Vakhtang Kapanadze accompanied Minister Khidasheli to the German hospital and added Rostobaia was being well taken care of by German doctors.

I would like to assure his family that Sergeant Rostobaia is [being treated] in very good conditions. He is not the first wounded Georgian soldier to be treated in this hospital. All our warriors were successfully treated and recovered here,” Kapanadze added.

The NATO website confirmed Georgia committed about 885 troops to the Resolute Support mission, meaning the country remained the largest non-NATO contributor to Afghanistan.

The Resolute Support mission was a follow-on task from the International Security Assistance Force (ISAF) mission, to which Georgia contributed about 750 troops.