Parliament EU Integration Committee Chair: Standing by the Georgian Government is the “duty” of those who “sincerely” want Georgia to join the EU

The European Commission this month formally handed over the European Union membership questionnaire to the Government of Georgia, based on which the Commission’s assessment will be prepared for granting the country the status of a candidate state. As a milestone on its path to integration, Georgia, along with Ukraine and Moldova, is taking the first real step to membership.

Agenda.ge spoke to Maka Botchorishvili, the Chair of the Georgian Parliament’s EU Integration Committee, about matters related to the integration process, Georgia's solidarity with Ukraine amid the ongoing Russian invasion, progress achieved by the country, and reforms carried out as preparations of a basis for a positive assessment of the European Commission.

Botchorishvili called the EU Council decision to invite the executive branch of the Union to submit its opinion on the membership applications of Ukarine, Moldova and Georgia on March 11 “historic”, adding it had been also followed by an “unprecedented” short period of time for the preparation of European Commission questionnaires for the Associated Trio.

The Parliamentary Committee Chair said she believed the European Union was the “most attractive space in the modern world,” based on the values that ensure the “peaceful and dignified coexistence” of its people - the values she said Georgia historically shared. Joining the EU means ensuring the protection of these values, the official told us, in addition to securing the development of the country that in turn ensures the “freedom, well-being and dignified future” of its citizens.

Due to the importance we attach to completing the questionnaire quickly and properly, this process will be personally led by the Prime Minister of Georgia. A working group has already been set up and taken important steps to start filling out the questionnaire on time. The agency responsible for each question has already been identified, and the preparation of answers to the questions has begun. The European Integration Commission, led by the Prime Minister,  review last week's results and determine ways to further the process," Botchorishvili said.

The Georgian Government is “fully mobilised” to ensure the process goes smoothly, she noted, it is now the “duty of all those who sincerely want” Georgia to join the EU to “stand by” the Government, or, in case of absence of support, to avoid hindering the process.

The Parliament official also said the current international situation had already accelerated Georgia's EU accession process. “Unfortunately, for the Associated partners [Georgia, Moldova and Ukraine] the basis for the acceleration of their prospect of EU membership has become the brutal aggression that Russia is carrying out against Ukraine,” Botchorishvili noted.

Today is the time for the European Union to boldly say and show the world with its resolute determination that independent states have the sovereign right to decide for themselves, and to choose the alliances they want. Otherwise, the idea the European Union is based on will not be safe or complete," said the head of the EU Integration Committee.

She also admitted after being granted the status of a candidate country, a rather "difficult and challenging" process would begin for Georgia, for which both the Government and the public "should be ready”. Ultimately, the pace of the EU accession process will depend on how quickly Georgia can move closer to European standards, the Georgian official added.

Agenda.ge also inquired about attitudes toward Georgia observed during Botchorishvili’s most recent visit to the European Parliament as the Chair of the Georgian Parliament’s Committee.

Georgia has “many friends” in the European Parliament who support its accession to the Union, she told us, adding representatives of the country were “constantly working” to expand the circle of partners further. “It is important for Georgia that during ongoing discussions at EU institutions, our friends constantly talked about Georgia and expressed their firm support,” Botchorishvili noted.

The Chair also believed a “clear prospect” of EU membership and a “green light” from the Union was “vital” for Georgia “as never before”, to start taking concrete steps on the path to EU membership. "This is our message, and our goal is for our European partners to understand and appreciate how important it is for us to support Georgia today [with] their strong voice in favor of Georgia's accession to the European Union," she told us.

Botchorishvili also noted that with the signing of the Association Agreement with the EU in 2014, Georgia had started the process of bringing its national legislation closer to EU laws. "Implementing 40 percent of the Association Agreement is not a small result for a country that does not yet have an EU candidate status and does not have access to the mechanisms available to other candidate countries," she said, noting that in addition to “a lot of hard work”, the process was often associated with the implementation of “painful” changes for different segments of society and required bold steps by the Government.

The Parliamentary Committee on EU Integration completed its work on a consumer protection bill approved by MPs a few days ago, with the legislation set to enter into force this year. Botchorishvili said the work on the bill was “undoubtedly significant”, but added its ultimate target and a smooth move toward it would be crucial.

We are currently working on several other important bills with various Parliamentary committees - including e-commerce and public procurement - and expect the Government to initiate new bills in all areas in line with the Association Agenda," the MP said.

The official also talked about acts of solidarity expressed by Georgia toward Ukraine since the start of the full-scale Russian invasion. "There is no other answer here [other than] maximum support and solidarity with the Ukrainian people and Ukraine in the fight for their country and for justice," she said. 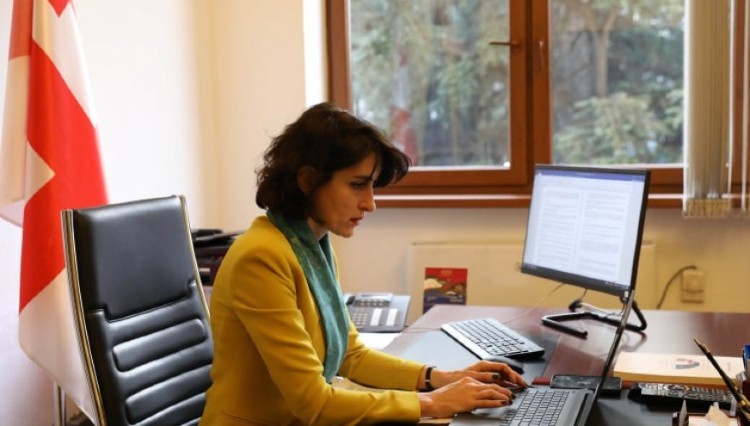 Botchorishvili said she believed “every step” taken by the Georgian Government since the beginning of the war was “very important” for Ukraine in the context of international political support. "All the steps taken by the Georgian Government to support Ukraine in the international arena are far more important to our friendly country than emotional statements [made] on [Georgian] TV that blame our own Government," Botchorishvili noted, adding that the Georgian Parliament Speaker departed to Ukraine along with a Parliamentary delegation on Friday. She called the move “another opportunity to express our solidarity and support for Ukraine.”

The year 2022 marks the 30th anniversary of the restoration of international diplomatic ties with independent Georgia. We asked the Parliament official about her assessment of the country’s diplomatic relations and achievements over the past 30 years.

Botchorishvili said the three decades since independence had been ”full of battles”, with both losses and gains made. "The greatest achievement is our state, with all its attributes. This is especially precious to me, and I find it difficult to be tolerant of those who deliberately disrespect and harm this great achievement and its interests. Today this state boldly stands among democracies and continues to fight to finally establish itself in the European family. This achievement is very delicate and needs to be taken care of," the Parliamentary Committee Chair told us.