The State Prosecutor’s Office have the final word if an investigation is launched into secret recordings of the private lives of Georgian officials and citizens that were illegally recorded and obtained over several years through illegal surveillance.

A Temporary State Commission, that oversees the handling of secret recordings of the private lives of Georgian officials and citizens, have called for an investigation to be launched to find out who gathered the secret recordings and why they were kept.

At yesterday’s session, Commission members announced their strong desire for an investigation to be launched into illegal audio and video recordings. 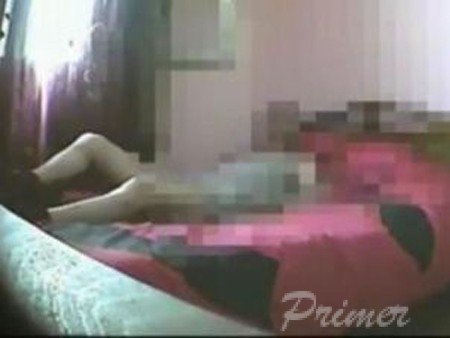 The Commission specifically wanted recordings of private life situations, including those of a sexual nature, to be destroyed and the remaining files to be investigated.

Civil society representatives including the executive director of Transparency International Georgia and Commission member Eka Gigauri believed this case would illustrate that systemic crimes were constant.

The snapshot of the secret recording of the private lives of Georgian officials that featured sexual relations was released by the local TVs.

"It is difficult to say how long it will take to determine the people who created these archives as well as those who ordered to film them. Thus, these individuals must be arraigned. The purpose of these recordings appears to be available for the possibility of blackmailing,”|/ Gigauri said.

Another member of the Commission, the head of Research Center for Elections and Political Technologies Kakhi Kakhishvili agreed to launch the investigation immediately.

"If we destroy recordings except private life situations it would harm an investigation to determine who were behind keeping of these secret recordings. For many years the budget funds were spent on obtaining information about political opponents for political missions. The recordings would be used for blackmail,” Kakhishvili said.

The recommendation to launch an investigation was also shared by the Interior Ministry. Evidentiary materials would be handed to the State Prosecutor’s Office for investigation.

"The CDs will be destroyed by putting them into a shredding machine in the presence of media and members of the Commission, like the previous ones were. The rest CDs will be handed to the State Prosecutor’s Office for investigation,” Izoria said.

The State Prosecutor’s office whether to launch an investigation or not, once the Interior Ministry has handled the evidentiary materials.

Georgia’s President Giorgi Margvelashvili said if the files that contained the offences would not be destroyed, in turn it meant "we are committing the crime again.”

The data of recordings

Latest data claimed the Interior Ministry housed about 635 CDs containing more than 750 hours of secret video recordings. Of these, two CDs contained recordings of the private lives of Georgian citizens. 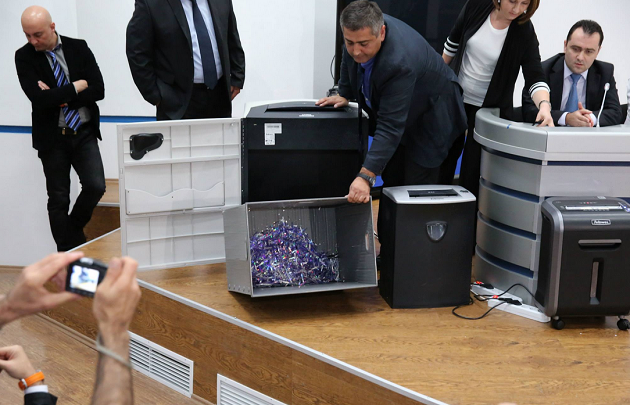 More than 110 CDs of illegally recorded information about Georgian citizens were publically destroyed on September 5, 2013. The CDs contained 144 files with more than 181 hours of secret recordings of Georgian citizens filmed between 2007 and July 2012.

Some recordings were graphic and featured sexual relations including homosexual activity and out-of-marriage-sex filmed from hotel rooms and other locations.

The process of destroying the CDs on September 5, 2013. Photo by police.ge

Recordings were part of a larger archive involving about 26000 files.

The files that were not destroyed include recordings of private conversations by celebrities, politicians, and journalists, as well as videos of showing torture of detainees made by the Interior Ministry, mainly under the rule of former President Mikheil Saakashvili.

The recordings were discovered in weapons storage in western Georgia in June last year.

At that time Saakashvili said that he had ordered the weapons to be hidden after the brief war with Russia in August 2008. He denied any involvement in the recordings.

Recommendation of the EU’s human rights adviser in Georgia

The handling process of the illegal surveillance recordings has provoked great interest from the international community.

The United States of America’s Ambassador in Georgia Richard Norland believed the Commission had a very difficult job ahead, as illegal recordings may become important materials for conducting the investigation. 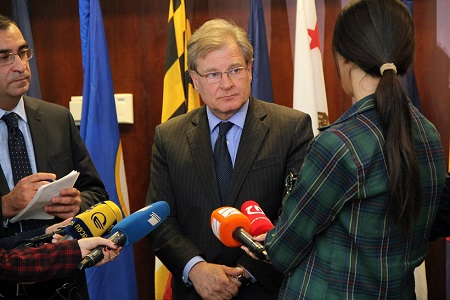 "Georgia is the only country among the former Soviet republics that has made the decision to destroy recordings that were obtained illegally,” Norland commented to journalists on January 29.

The process of destroying the recordings on September 5 was carried out following recommendations by the EU's Special Adviser for Legal and Constitutional Reform and Human Rights in Georgia Thomas Hammarberg.

The United States of America’s Ambassador in Georgia Richard Norland. Photo by by US Embassy

The recommendation read that secret recordings of private life situations had to be destroyed after a "fast and efficient review.”

"The existence of illegal recordings is a reflection of extremely serious crimes requiring both a judicial and a political response. The recording was criminal in all its aspects: including the planning thereof, the instruction to take such action and the actual activities to film or tape. The possession of these recordings must be criminalized,” Hammarberg’s report said.

The Commission’s term of office

On January 31, the Commission will stop their seven months’ work and issue a report about its work and recommendations. The report will also evaluate how methodical the illegal practice was.

At the latest meeting Commission members agreed to tighten surveillance rules, in particular, it planned changes in the Criminal Code as well as six other local laws.

Civil society representatives believed this would guarantee authorities will not commit the same crimes in the future. 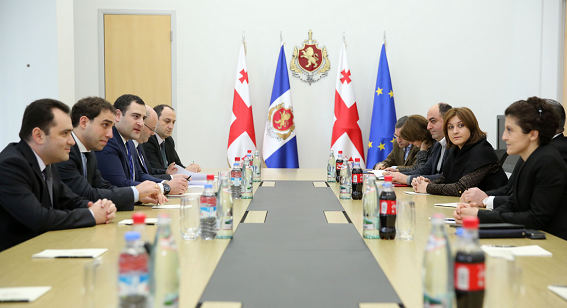 The Commission's meeting on January 29, 2013. Photo by police.ge