"I was about 10 or 11 years old at the time,” says a clean-shaven, gray-headed man as he begins to recount his harrowing tale.

"We were living in Kislovodsk when in August 1942 German troops approached the town...”

The man stopped talking. The pain etched on his face as he remembered the past.

Needing encouragement I repeatedly ask about one particular incident from that moment in time but each time his stream of consciousness goes off on a tangent.

"May I help him along?” asked a woman who was sitting silently in the corner of the room.

"Please do,” I replied, and the man looked encouraged as the woman continued narrating.

Tbilisi residents Akaki Metreveli, 85, and his wife Izolda, 77, share a heartbreaking story of a Georgian man who risked his own life and family, including a pregnant wife, to rescue Jews during World War II. 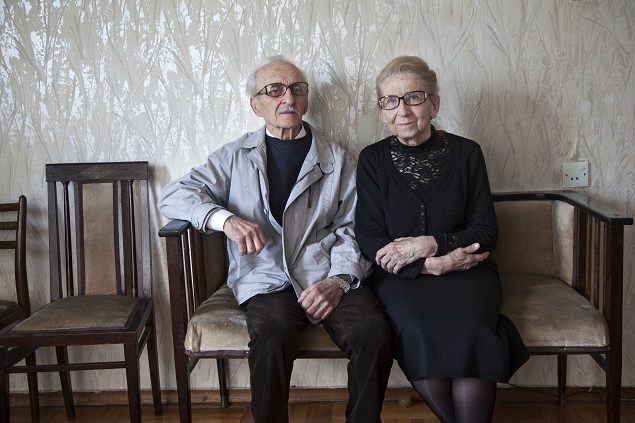 Akaki Metreveli and his wife, Izolda, shared a story of how Akaki's father saved six Jews in 1942. Photo by N. Alavidze

In the 1940s Sergi Metreveli was a wine-maker in Kislovodosk, in Northern Caucasia. When Nazi soldiers began to persecute the Jewish, Metreveli helped a group of six Jews to leave the town in August 1942.

For 16 days Metreveli, who left his pregnant wife and three children at home, secretly led a group of Jewish refugees through the Caucasian mountains and took them to a safe place in his native village in Georgia, where his parents lived.

Back home, Metreveli’s wife sheltered two Jewish teenage girls. Not long after the girls arrived, the pair decided to leave, saying it was "extremely dangerous” for the family to hide Jewish guests at home. The woman begged the girls to stay but they refused and calmed her down by saying they were going to join other Jewish people in a safe place. 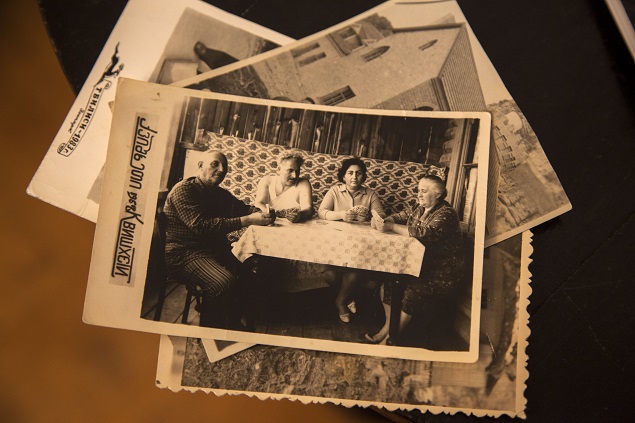 Meanwhile, among the Jewish people Metreveli led to Georgia was 16-year-old Emil Zigel, whose three brothers were killed in the war. The teenager’s parents were shot by German troops.

The journey was hard and illness was rife. Zigel was suffering from malaria when he arrived at the Metreveli family home in the village of Utsera, which is located in the Racha region of Western Georgia. The Metreveli family treated him and offered him care and soon the boy recovered. When he regained his strength, Zigel voluntarily joined the Soviet Army to fight against the Nazis. 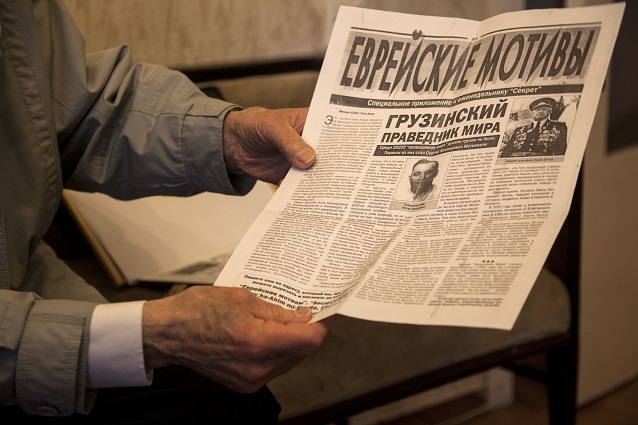 Akaki Metreveli shows a newspaper article about his father and Colonel Zigel who was 16 when Sergi Metreveli saved him from death. Photo by N. Alavidze 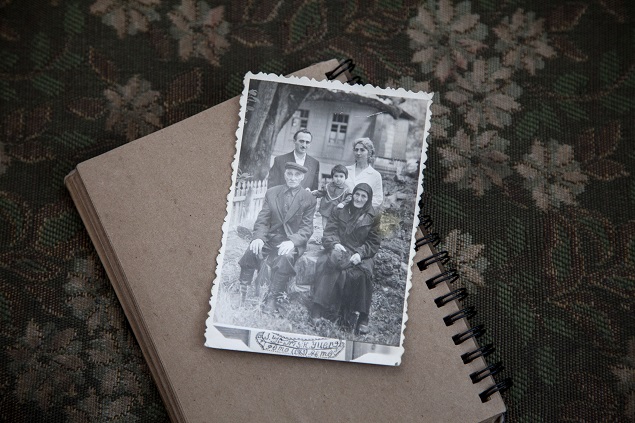 Sergi Metreveli's parents, who took care of Zigel who got malaria during a long and difficult journey. The photo is taken in the Utsera village in Racha, Western Georgia. Photo by N. Alavidze

Despite time and distance separating Zigel and the Metreveli family, he never lost contact with them. In 1946 – four years after he met Metreveli, he visited the family again.

In 2004 at an official hearing to tell the stories of non-Jewish people who saved the lives of Jews during WWII, Zigel, who now held the rank of Guard Colonel, wrote in his evidence: "I happened to be with the Metreveli family in February 1946. They welcomed me as their own son, and afterwards, I visited them on each vacation. Sergi Vasilyevich [Metreveli] deserves to be named as the Righteous Among the Nations as I am alive thanks to him.”

Before Zigel spoke these words, the story of how the Metreveli family sacrificed their safety for the benefit of others was unknown to the world.

The hearing was instigated by Jewish to formally recognize those who had sacrificed themselves to protect Jews during WWII. From the hearing, stories would be told and people would be named Righteous Among the Nations and appointed to the Yad Vashem Memorial Museum of Jerusalem.

Metreveli is the only Georgian honoured with this prestigious title. In 2004, based on Zigel’s evidence, he was added to the list alongside 24, 811 others from around the globe. 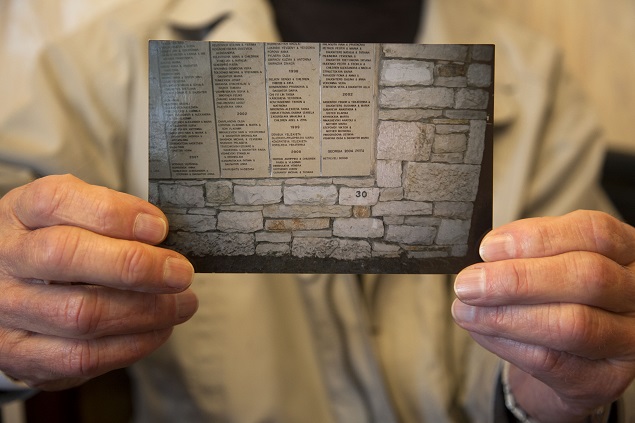 Sergi Metereveli's name is on the memorial board of the Holocaust museum in Jerusalem; Photo by N. Alavidze

At that time Metreveli had passed away. His family was invited to the inscribing ceremony in Kislovodsk, but they could not travel there because of the complicated Georgian-Russian relations.

As the story ended, the old couple sat in silence, reflecting on the past. Izolda said: "He [Sergi Metreveli] was a very good person, not because he was my father-in-law but because he raised really good children.” She looked at her husband. The old couple smiled at each other.

Tales of the war had a profound effect on those involved and many did not share their war experiences. Likewise, Akaki and Izolda’s daughter Eka Metreveli said she was unaware of her grandfather’s heroic actions until 2004 when he was awarded with the honorable title that will see his bravery remembered for eternity.

"He would not talk about this, he was modest,” the granddaughter said.

Besides Metreveli, records showed there were three other Georgians who sacrificed themselves to protect Jewish during the Holocaust. Their stories remain unknown to the wider world.

Firstly, during WWII when Germany occupied most of Europe, Grigol Peradze, a Georgian philosopher who knew 13 languages, was the head of the Warsaw Orthodox theological seminary. He provided shelter to those who were being persecuted by the Nazis. For this, he was arrested and taken to Auschwitz concentration camp.

One of his fellow prisoners at the camp later said, in 1942 Peradze met a man who had a large family inside the camp. The Nazis had decided this man would be gassed to death. Peradze, who felt sorry for the man’s family, tricked authorities and entered the gas chamber in his place. Peradze died on December 6, 1942.

Secondly, Mikheil Kedia was a Georgian emigrant who lived in France during WW2. He saved about 70 Georgian Jews from death.

Kedia and several other Georgians wrote a memorandum claiming Georgians and Georgian Jews shared a common language and cultural habits; therefore, they were Georgian patriots, nationalists.

Kedia and the group empowered the memorandum with scientific arguments and mentioned:

Nazi high officials looked at the argument, decided it was reliable evidence. As a result the Nazis withdrew the resolution to deport Georgian Jews. Non-Georgian Jews were also saved as Kedia created false Georgian documents for those in need.

Meanwhile a new wave of Jewish persecution during the Russian Empire grew at the time of the Russia-Japan war. Under the leadership of Black Detachments, a raged crowd killed and cruelly oppressed Jews.

In 1905 a similar persecution took place in the Ukrainian city of Odessa. This time there was no one to appeal to. Desperate Jews, who were predestined to die, were led by the elderly holding the Torah in their hands. Executioners shot the Jews as they prayed.

One young man emerged from the crowd of people and stood in front of Jews with opened arms. This was a Georgian professor of Odessa University, 32 years old Saba Kldiashvili.

A bullet was shot in his forehead. He died the next day.

The four Georgian’s mentioned above are recognized as Georgian Schindlers by historians who know about their plight to save the Jewish. Sadly, not many people in Georgia and even fewer abroad have ever heard their lifesaving stories.